For the Love of Bulldogs in NYC 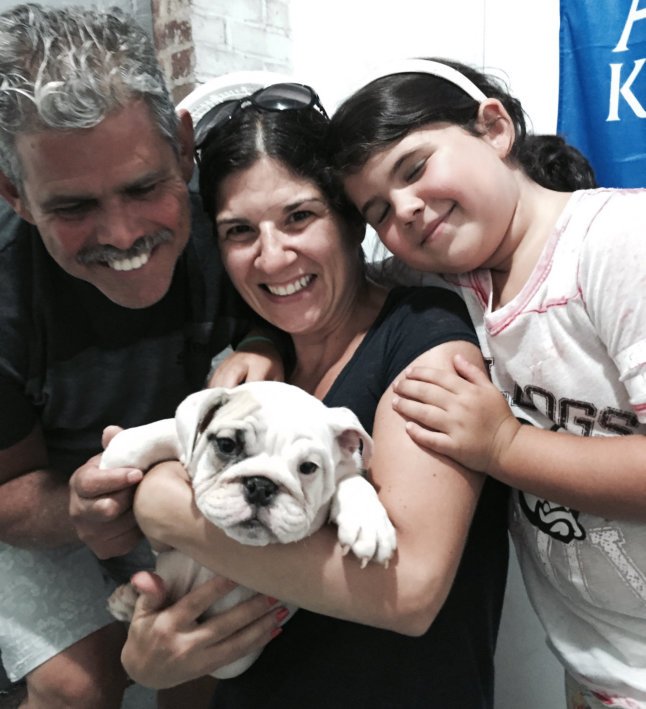 True confession:
I was never an “animal” person. We had a goldfish growing up and when my younger sister killed it by putting an entire roll of toilet paper in its bowl, I saw no need to get another.

About six years ago I had a change of heart. Not for fish, I still don’t care for them. But for dogs, English bulldogs to be exact. My seminal moment came when a very good friend of mine showed me a picture of his three month-old English bulldog puppy. Though overjoyed by his new companion, my friend was going on and on about how sleep deprived he was as the puppy cried all night and hated to be left alone.

While my friend kept talking about his lost hours of sleep and having to rub the puppy’s back to get him to go back to sleep, I stopped listening. All I could do was stare at that picture and swoon over the cuteness. The world then stopped for me.

I was in love and we hadn’t even met yet.

Later that day when I came home to my 600 square-foot New York City apartment, my husband and my five-year-old daughter, I told them we were getting a dog. My husband looked at me like I was crazy. He said we lived in New York City, had barely enough space in our apartment for the three of us, and to get the thought of getting a dog—any dog—out of my head. Don’t get me wrong, my husband is in no way anti-dog. Growing up he had a bunch. But he lived in Hawaii. His dogs slept outside, took long walks on the beach, probably even surfed and NEVER road in a taxi, that’s for sure. But I did not care. I was determined to get an English bulldog, raise it from a puppy and heck, maybe even teach it to hail a cab. Fast-forward 3 years:

Meet Hula. Born-and-bred in Queens, NY. Hula came in like a hurricane. Although the cutest thing I’ve ever seen and the best thing to happen to our family, she had pneumonia for the first three months of her life, a host of skin issues as a baby, and couldn’t even touch the dirty city streets until she was almost 5 months, (I carried her around in a bag and called her my latest fashion accessory).

All these issues in the first year of her life meant a lot of trips at to the vet. (And a lot of taxi rides, too.) Thankfully, I had the foresight to get insurance. And many of Hula’s issues were covered up to 90%.

When Hula was finally able to hit the ground, we loved to explore our neighborhood. Our 30-minute walks easily morphed into an hour—there was a photo-op on every block because someone wanted to absorb her cuteness. Now three-years-old, Hula has a big personality (I swear she is part human) and is still living and loving the NYC lifestyle.

We get to interact with tons of paw-friends—all breeds included, though Hula is particular with whom she chooses to socialize with. We have a host of Bully friends we schmooze with around town—Bernie, Bull, Finn, Celo, and Arnold to name a few.

We visit the doggie cafe in the neighborhood www.borisandhorton.com, get our exercise by chasing pigeons and food delivery guys on their bikes (bulldogs, BTW, have a love-hate relationship with anything with wheels which makes crossing big streets somewhat of a tug-of-war) have a host of NYC smells to devour, (there is never a shortage of garlic wafting from the local pizza joint) and still hop in a taxi every now and then. I have to say, it’s so much fun raising a dog in a big city, it never gets boring.
Even my husband agrees.

Breed: Why Is It a Crucial Factor When Choosing Pet Insurance?

Pet insurance can save...

Foreign Body Ingestion: A Common Claim Covered by Insurance (And How You Can Keep Your Pet Safe)

Curious as they are, pets...

While New York City is...

Why Pet Insurance Is Worth Investing In

It is only natural for...

From a NYC Veterinary Practice Manager To All NYC Pet Parents – Getting Pet Insurance Will Give You Peace of Mind…….

To all NYC pet parents...

6 Surprising Ways to Help You Save on Veterinary Costs

Pet insurance is one of...

Guarding Your Cats Against Toxoplasmosis